Former railway engine shed turned iconic musical stalwart in the heart of Chalk Farm, The Roundhouse has played host to an abundance of iconic gigs over the years. In recent times the likes of Arctic Monkeys, Queens of the Stone Age and even Bob Dylan have graced Camden’s premier venue. Last night, it was Stockport’s most charming 5 piece Blossoms’ turn to write themselves into the history books as the NME Awards Tour rolled into a sold-out Roundhouse.

The band’s customary spectacular entrance accompanied by Kanye West’s ‘Black Skinhead’ had the already buoyant crowd craving the first note which came in the form of single ‘At Most a Kiss’, an opener that punches you in the with it’s heavy, moody guitar and driving drum riff supplied by Joe Donovan. ‘Texia’, one of the many shimmering indie-pop numbers from their immensely successful debut record swiftly changed the tone, but not the mood as the crowd once again sung every word back to the ever endearing Tom Ogden. Without any doubt, Ogden has continued to establish himself as one of the most iconic frontmen of the current era, possessing a sense of style and charisma that those with an Alex Turner shaped hole in their heart will cling onto with fondness.

Blossoms are currently journeying across the country as part of the NME Awards shows, making it their third headline tour in the UK in the last 7 months. Relentlessly touring one album highlights the importance of incorporating B Sides into a setlist and taking into account years of grafting prior to their chart explosion, the Stockport band have them coming out of their ears. The brooding, yet explosive ‘Smoke’ shows a different sound to Blossoms for those only familiar with their eponymous album, but certainly warranted it’s inclusion alongside ‘Across the Moor’ and the high-octane ‘Polka Dot Bones’.

Many of the highlights of the night came when Ogden swapped his imposing Rickenbacker for the acoustic as sing-a-long favourite ‘Blown Rose’ where the frontman waxes lyrical about the ‘Stately homes of England’, arguably the most prominent demonstration of his ability to write a truly anthemic chorus.

With the rest of the band leaving the stage, Ogden was then joined by lead guitarist Josh Dewhurst’s Father, Robin Dewhurst on the keyboard for a stunning rendition of another B Side, ‘Stormy’ from the Blown Rose EP. Who says it’s not cool to have your Dad come on tour with you? Dewhurst stayed onstage for fan-favourite ‘My Favourite Room’, a melancholic recounting of a break-up which frontman Tom once again dedicated to a broken-hearted fan who had gone through the same pain after being dumped by his girlfriend. This soon encouraged a John Lennon and Oasis medley after the arrangement of chords led Ogden into a beautiful rendition of ‘Imagine’ and ‘Half the World Away’ which was unsurprisingly met by rapturous screaming and applause.

The night ended with the brilliantly infectious ‘Charlemagne’, a dangerous reminder of what propelled them to chart success back in August. As fans began to filter out of the Roundhouse, Tom Ogden’s cry of “We’ll see you at Brixton” reflects the ever present desire and intent that Blossoms possess. The seemingly unstoppable voyage that the band currently find themselves on serves as a reminder of the power of hard work and how far it can get you.

“In January 2014, we were playing a gig in The Monarch – Who was there?” Ogden asked the crowd. The band’s humble nature when assessing their ascent to this point has undoubtedly contributed to their enormous success and long may it continue. 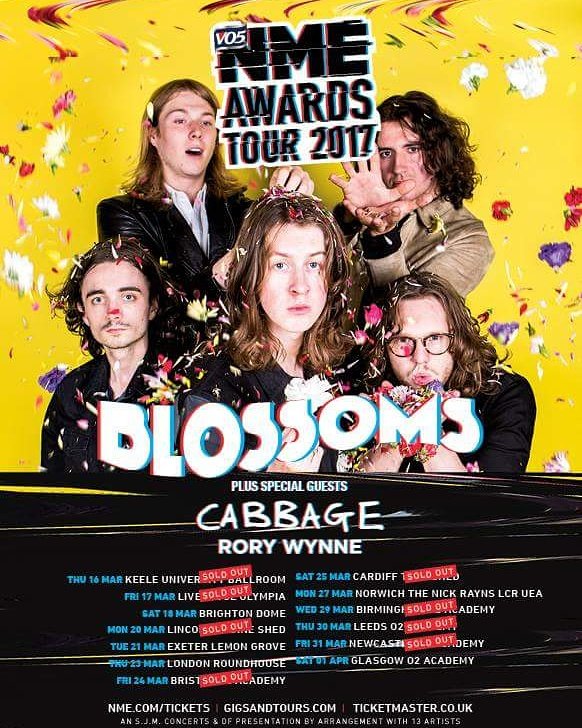