DIIV ‘Is The Is Are’ – ALBUM REVIEW

This DIIV article was written by Adam Skirving, a GIGsoup contributor. Edited by Natalie Whitehouse.

A long and winding, often taxing path has led Zachary Cole Smith up to the release of DIIV’s long-awaited second album ‘Is The Is Are’, hailed by Cole in an interview with NME as “by far the most important thing I’ll ever do.” Drug arrests, prophetic claims, accusations of racism against band members, and serious opiate indulgence have all plagued the road between DIIV’s 2012 album ‘Oshin,’ and forthcoming ‘Is The Is Are’. At an expansive 17 songs, Cole set out to make a double-album in the mould of some of his absolute favourites such as ‘Tusk’ by Fleetwood Mac, while attempting to simultaneously redeem his personal character and cement his musical depth to fans and spectators.

Largely, the album follows a path of combining two melodic and often chirpy guitar lines, mostly in minor keys, with everything heavily laden in reverb. Penultimate track ‘Dust’ is a perfect example of this formula in action. ‘Under The Sun’ bleeds cathartic energies and tones, and throws a hook-and-line guitar riff to catch the listeners ears. It is Cole’s sonic redemption song. ‘Valentine’’s descending dream-like guitar runs allude to The Maccabees ‘Given To The Wild’ and espouses a similar atmosphere as that album.

‘Healthy Moon’ channels the main thematic of the album; the optimism/melancholia dichotomy, in a beautiful and infectiously layered, twang guitar heavy track, that fades to grand piano. ‘Blue Boredom’ features Cole’s longtime beau Sky Ferreira, and echoes Sonic Youth in the vein of Kim Gordon, sounding like a more polished song from ‘Goo’. The album displays its darkest tones on ‘Mire (Grant’s Song)’.

Some of DIIV’s influences appear quite obvious, ‘Bent (Roi’s Song)’ alluding to a cleaner, tighter vision of Sonic Youth or indeed that general era of 90’s alternative guitar music. In many senses, the cleaner and improved production quality of ‘Is The Is Are’ is much more listenable than many albums of that era, and placates the ears in a way that the DIY recording aesthetic of many of DIIV’s influences may have failed to do through bad sonics. It is notable, however, that DIIV’s music is particularly rooted in a pop sensibility, and so they are more comparable to Nirvana – the punks rooted in pop melody – than any of the noise-guitar bands of the 1990s. This is clear in the ultimate finished product: the production quality of ‘Is The Is Are’ allows the airy guitar melodies plenty of room to breath, whereas a more lo-fi recording sound may have convoluted the ability for Cole’s highly developed melodic sensibilities to shine.

Cole is particularly inspired by the master of melancholia, Elliot Smith, whom he has professed his love for many times before – girlfriend Sky Ferreira gifted him one of Smith’s guitar’s on their first Valentines Day together – and citied him as a direct influence on the writing of DIIV’s second album. The production quality of Elliott Smith’s first major label album ‘Figure 8’, which expanded enormously on his sound and style, has had a direct effect on the writing of ‘Is The Is Are’. There are echoes of the guitar lines of ‘Son of Sam’ throughout, and Cole does well to channel a masterful album through his own art.

‘Is The Is Are’ feels like one big opiate-induced dream, coasting on clouds surrounded by clattering guitar lines, thundering drums and vocals that could be mistaken for your own-consciousness murmuring back at you, and in turn, is capable at points of simulating some profound feeling of revelation and euphoria, drug-induced or not. Despite most of the songs being played in minor keys, ’Is The Is Are’ sounds overarchingly hopeful in the build-up of its sonic textures, and though melancholy is omni-present, it is rare that it becomes the overriding emotion.

‘Is The Is Are’ is out on the 5th February via Captured Tracks. 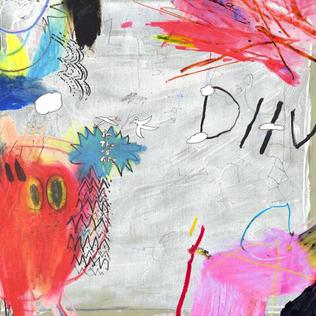