After previously announcing the likes of headliners Future of the Left, former Can vocalist Damo Suzuki, Mugstar, Hey Colossus, Sex Swing and a host of others, WRONG Festival has released the final batch acts for its second edition.

Among the final additions to the line-up are the mighty Gnod, arguably one of the finest underground acts in the country today. Joining them on the bill will be the likes of Spectres, Bilge Pump, SPQR, Thank, Death and the Penguin, Table Scraps and many more.

There will also be a selection of Merseyside-based acts including doom metalers Conan, Elevant, Gravves, Ohmns and Salt The Snail vs Bleach Sweets.

After its successful debut last year, the one day event will take place across three performance spaces at Invisible Wind Factory, North Shore Troubadour and Drop the Dumbulls on the Liverpool Docklands from the early afternoon and into the next morning on Saturday 28th April.

Billed as a “festival for the freak scene“, WRONG Festival aims showcase underground artists and is organised by local independent label Loner Noise in association with the online underground music publication The Quietus, which also celebrates its 10th anniversary in 2018.

£12 and £15 early bird tickets have already sold out, with £20 discounted advance and £25 advance tickets still available. These can be purchased here. 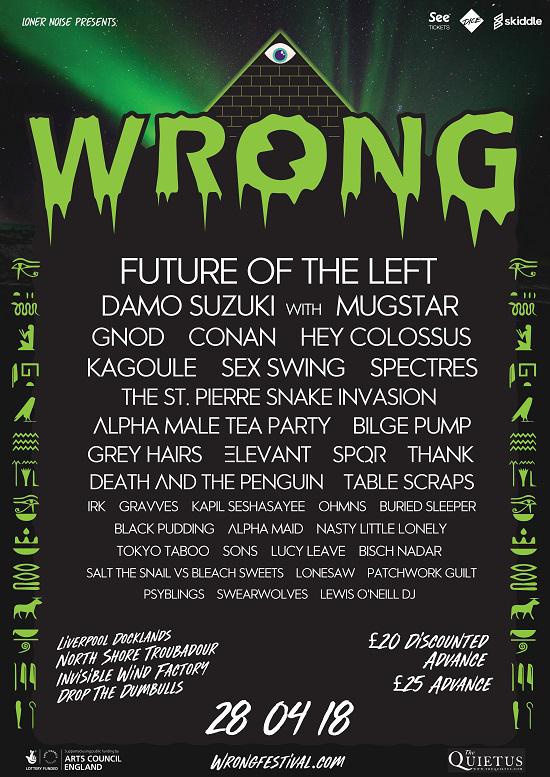