Safe As Milk Festival Cancelled Due to Poor Ticket Sales

The inaugural Safe As Milk festival has been cancelled due to poor ticket sales, with the company behind it forced to go into administration.

The event had been scheduled to take place at Pontins holiday camp in Prestatyn, North Wales over three days from 21st-23rd April.

Butthole Surfers, Shirley Collins, The Residents, Jeff Mills & Tony Allen, This Is Not This Heat, Ulver, Anna Meredith and Princess Nokia were among those set to perform at the festival.

Despite much enthusiasm over its unique and diverse line-up, for many its cancellation will contain echoes of All Tomorrow’s Parties which also went into administration after cancelling events due to poor ticket sales.

In a statement was posted on its website on Thursday morning (30th March), the organisers said:

“We are very sorry to announce that we have had to take the decision to cancel Safe As Milk Festival. Despite the widespread excitement about the event, we’re sorry to report that ticket sales have not reached a level to make the event viable so, despite our best efforts, we have no other option but to cancel.”

“We would like to apologise to all the customers, artists, partners and suppliers that have been let down by this situation. We felt we should take this decision now in the hope of minimising inconvenience to all involved.”

“We would also like to thank the many people that have worked with us on trying to make Safe As Milk happen and the many of you that have shown such enthusiasm for the festival.”

If you purchased a ticket, details on how to go about obtaining a refund can be found here. 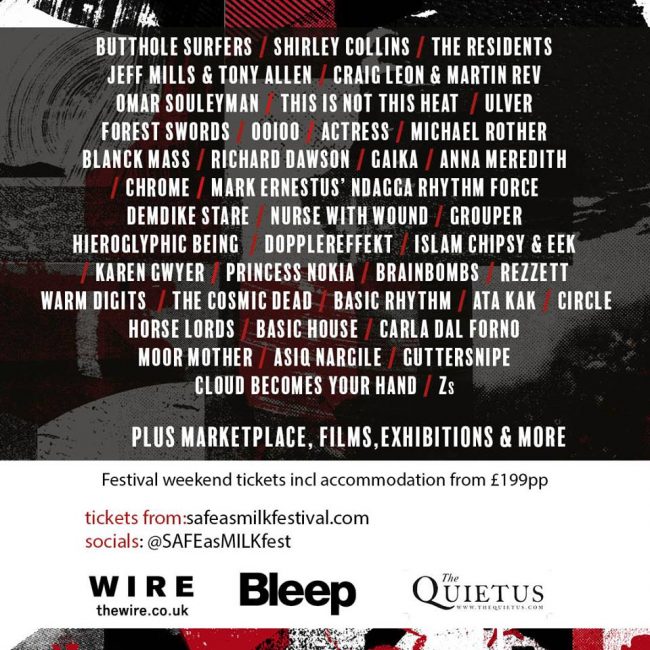 Egyptian Lover at the Jazz Café (14 Feb 2020); and we look forward to Global Communication

Do NOT follow this link or you will be banned from the site!
Close
You want more Indie, Rock and Electronica articles?