In 1996, Super Furry Animals arrived on the scene with their critically-acclaimed debut, ‘Fuzzy Logic’. Twenty years on, the band are reissuing the album (4th November 2016), along with rarities and B-sides from that era.

There were four singles that came out of the band’s maiden release: ‘Hometown Unicorn’, ‘God! Show Me Magic’, ‘If You Don’t Want Me to Destroy You’ and ‘Something 4 the Weekend’ – the latter being the highest charting of the bunch, reaching a respectable #18 in the charts and garnering a significant amount of radio play.

There was also another single, not on the album, later released in December ’96 entitled ‘The Man Don’t Give A Fuck’.

Although the singles are remarkable in their own right, it’s the B-sides of this era that really stand out. More than often, B-sides are seen as execrable fluff – cast-offs that never quite made the cut. They needed a home, but it wasn’t to be found on the album release. However, this certainly can’t be said of the ‘Fuzzy Logic’ flipsides, which are truly gems.

The Furries‘ first single to chart, in February ’96, was ‘Hometown Unicorn’. The song gave the band their first taste of success being picked as NME’s Single of the Week by guest reviewers Pulp.

‘Hometown Unicorn’ itself is something of an anthem. With a big chorus, the song focuses on the alleged alien abductee Frankie Fontaine.

The track is backed by two B-sides: ‘Lazy Life (Of No Fixed Identity)’ and ‘Don’t Be A Fool, Billy’. The band’s first single release is the only one not to feature a Welsh-language B-side. Perhaps with this being their first foray into the mainstream, the band wished to appear more accessible.

‘Lazy Life (Of No Fixed Identity)’ is a beautifully messy meld of high energy and hooky lines. Short, at just over two minutes, the song is essentially one big chorus with the same drive and dynamics throughout. It’s overall quite a punky number with synth swirls and brass stabs punctuating the repetitive chorus. Towards the end, there’s even a taste of some Thin Lizzy-esque harmonised guitars to round off a great snip of catchy, energetic rock.

Accompanying number, ‘Don’t Be A Fool, Billy’ is quite the different story. A lazy guitar solo intro slides into a slow pseudo-bossa verse bemoaning the plight of the protagonist, Billy. The chorus picks it up, turning on the distortion to a more fuller sound layered with vocal whooping and a great hook line.

The follow-up single and opening track on ‘Fuzzy Logic’, ‘God! Show Me Magic’, shared the dubious honour of its predecessor as NME’s Single of the Week. Raw and rocky, the single clocks in at mere 1:50, but nevertheless packs a punch.

Its partner tracks, ‘Death by Melody’ and ‘Dim Bendith’, take on a slightly different slant. The former takes on something of a Kinks vibe. Upbeat and whimsical musically, the lyrics to this number are both witty and ridiculous in equal measure: “the right are wrong, the left have gone right/thought they might taste the Angel Delight.”

It’s companion, ‘Dim Bendith’ (Welsh for ‘no blessing’), encompasses a more mature sound, off-setting the playfulness of ‘Death by Melody’ and the punkiness of the single. The track is characterised by the slow-moving electric piano, which underpins the whole thing. Over the top features soloing guitars and synthetic noise pulling along this slow grind of a song. And slow it may be, but ‘Dim Bendith’ is certainly a rewarding listen – an atmosphere builder that rounds off this collection of songs perfectly.

Without a doubt the most successful single from ‘Fuzzy Logic’ was ‘Something 4 the Weekend’. The single version saw a tamer version to the one on the album, but still had all the charm and catchiness of the original. However, for the more discerning listener, the album track was included as one of the B-sides. More boisterous than the single, and stylised as ‘Something for the Weekend’, this version does a lot to bring out the memorable sing-a-long chorus which makes it one of Super Furry Animals‘ most memorable tracks.

Pairing ‘Something for the Weekend’ is ‘Arnofio/Glô in the Dark’ and ‘Waiting to Happen’. ‘Arnofio/Glô in the Dark’ seems like two songs moulded into one, which, judging by the title, may be the case. The first half of the song sounds like something straight out of ‘Pet Sounds’ era Beach Boys, with layered vocals, whirring electric piano and a bassline uncannily similar to that of ‘Good Vibrations’.

In stark contrast, the chorus bursts in unexpectedly, brash and bold as you like, and catchy as anything, before swiftly simmering down to a gentler sound. There seems to be a theme here, also, as this time around the band appear to have lifted the bassline for Led Zeppelin‘s ‘Dazed and Confused’. This climaxes into the ballsier section, seeing the song out.

‘Waiting to Happen’ is less dynamically varied and more straight-up in its approach. If the verses seem a little meandering, then its to lure you into a false sense of security, before the chorus chimes in at “turn it to 11” with an incredibly hooky melody. 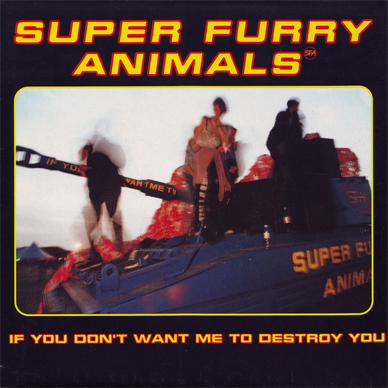 The final single from the album, ‘If You Don’t Want Me to Destroy You’, features the B-sides ‘Guacamole’ and the very wordy title of ‘(Nid) Hon Yw’r Gân Sy’n Mynd I Achub Yr Iaith’.

The lengthy Welsh title is tinged with irony, as it translates as ‘this is (not) the song that will save the Welsh language’. As laid back a tune as any, this number is just a great, lazy swaying rocker. It later featured on the deluxe edition of ‘Mwng’ – a collection of the band’s Welsh-language songs.

‘Guacamole’ is very much different, smacking a little of Ramones due to its energy and drive. It’s also perhaps the most animated Gruff Rhys’s voice gets when he goes all rock ‘n’ roll sounding something like a jacked-up Jerry Lee Lewis.

‘If You Don’t Want Me to Destroy You’ technically has another B-side, also. ‘The Man Don’t Give A Fuck’ was originally intended to be so, but was later released as a single in its own right. This one is significant as it helped establish the band’s cult status by featuring the word ‘fuck’ over 50 times. A record for a while beaten by Insane Clown Posse‘s ‘Fuck the World’ (93 times) before a live reissue reclaimed the accolade. The song features a looped sample from Steely Dan’s ‘Showbiz Kids’ – the clearing of which was a factor in the song not featuring on ‘If You Don’t Want Me to Destroy You’. Either way, the tenuous flipside and hypnotic rocker is still one of the Furries‘ most reknowned tunes.

For those wanting to catch a listen of these B-sides, they are all featured on the anniversary reissue of ‘Fuzzy Logic’ coming November 4 on BMG.